HOW I MADE IT IN LORETTO - Chioma D.Oguadimma

HOW I MADE IT IN LORETTO

Whenever I am asked how I made it in Loretto, I become quite flustered. Indeed such questions in the past tense awaken me to the reality that I have really graduated from Loretto. Oh, how time flies! Three years come and gone, yet my first day in Loretto is so fresh in my memory like it happened the day before. Most success stories are personal eulogies but the account of my momentous stay in Loretto is not essentially a success story. Rather it is the story of a young girl who like Abraham Lincoln was a slow walker who never walked back in her 3 years in Loretto.

I still remember the feeling of euphoria with which I walked into Loretto in September, 2015 in my immaculate white gown. Truly, it was a dream come true for me. I was lost in reverie until the admission process was over and my mother said her goodbyes. Once my mother’s back was turned, it dawned on me what I had got myself into. My beloved mother had come and gone leaving me alone in this new world without prior experience of boarding school life to recourse to.  Indeed, nothing can be more intimidating than a transition into the unknown.

However, due to the benevolence of the older students; especially those who were also from my Alma mater, Girls’ high school, now Rosa Mystica High school, Agulu, one of whom became my school neighbour and bunk-mate;  I soon settled into my hostel. As if to stress the fact that Loretto was not a playground, I received a long list of the names of school prefects and the school ethos on the marble from my ever so kind neighbour who patiently explained that it was imperative for all new students to learn those by heart in order to avoid punishment for both themselves and their neighbours. My shock was beyond words, as I could not bring myself to conceive how one would expect a human being to learn that much seemingly useless data in a day. I later learned that it was all for our own good.

Acclimatising to the ambience of the school was an uphill task. The food rations were smaller than what I was used to at home and the school timetable was so full of activities. Then there were the issues of stipulated sacrosanct lights-out bells, rising bells, siesta bells second bells for prayers and the novelty called “Night Prep”. All these buzzing disruptions, which we have been made to understand as voco Dei, (voice of God), nonetheless, I grew with the understanding and awareness of what Abraham Lincoln said, “that the best way to predict your future is to create it”. Conscious of this, I decided to create an enviable future by abiding by the school rules, eschewing bad company, making excellence my lifestyle and staying committed to my relationship with God. Today, I can proudly say that I have never regretted that decision.

In my resolve to thrive in this new world, I had other challenges. Really, in Loretto we studied, we worked, we prayed and we graduated. Before I became a student of Loretto, I used to admire the beautiful flowers and the celestial landscaping in the school premises without realising the effort it took on the part of the management, staff and students of the school. Indeed, it is just as Michelangelo said, “if people knew how hard I worked to achieve my mastery, it wouldn’t seem so wonderful after all”. On our first Saturday in the school, my class, SS.1D was to transport heavy stones in bags from one end of the school to another. Most of us were not used to such hard work and we worked until we felt faint. We resorted to composing a new anthem with a name we felt suited the school better, so that day, Loretto Special Science School, Adazi became Loretto Special Labour School to us. Just when we thought it could not get any worse, the school manager, Fr. Hilary Nwajagu informed us that we were also to weed the nearby grasses and transport the sand beneath the stones! You can imagine our disillusionment. We felt we were princesses turned labourers. However, when I look back now, I am full of thanks to the school manager and staff for equipping us for life after graduation.

Amidst all this, the sequential school timetable, the incessant calls for “any SS.1” from the seniors, as well as the routine labour and hostel work, I began the battle with sleep, (Morpheus) during prep. In fact, I was a usual practitioner of 'sleep-reading' known as “Atipenku” in Loretto. After the first term examinations, I took the second position overall. I was happy because I had proved wrong the predictions of some older students (who knew that the first position had become something of my birth right in my Alma-mater) that had told me that I would be lucky to find myself among the first twenty students due to the competitive nature of Loretto. But I resolved to become the best student in my class the next term. My resolve was brought to fruition when I came first in the second and third terms. Subsequently, I emerged the overall best student in SS.1 and by the grace of God; I maintained that position in SS.2.

Worthy of note are the challenges I faced in combining the preparation and participation in competitions with school work. In this area, the teachers were most considerate. They offered to teach me topics taught in my absence and allowed me to submit assignments and projects, as well as write tests done in my absence. In the third term of SS.2, I was made the general disciplinarian/study prefect of the school. Initially, I found it difficult to combine school work with the post. Anyone who has not experienced life as a school prefect may not fully appreciate what a privilege and enormous task it is to be a Loretto prefect. But in time I adjusted to the needs of the moment with the ultimate goal of getting a good WASSCE result, which thankfully I have achieved.

At this juncture it suffices to say that success and failure are both predictable as they are results of the self-same thing: “a decision for or against discipline”. The sum total of a person’s life particularly students is a result of the decisions they make daily. As a student, I resolved to learn new things daily in the light of Albert Einstein’s statement, “you start dying when you stop leaning”.

In a nutshell, there are no hard and fast rules as to how I made it in Loretto, but to the younger stars of this great citadel of learning I will say this: juxtapose a daily strive to make investment in your future as regards academics with a well-guarded, intimately built relationship with God almighty. Live a life worthy of the title “princess of Loretto”. Imbibe discipline as a lifestyle because the future of our generation and posterity is dependent on us.

Finally, keep to heart the words of Ella Wilcox, “there is no chance, no destiny, and no fate that can circumvent or hinder or control the firm resolve of a determined soul”. 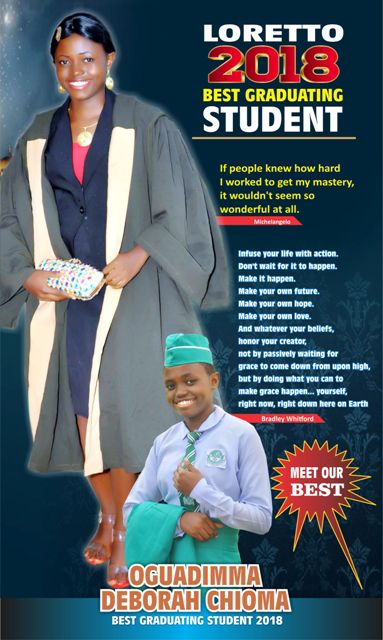